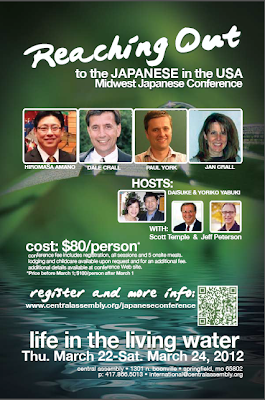 ハレルヤ、尊き主の御名を賛美します。
いつも米国宣教の為に、お祈りを宣教献金の献げものを感謝いたします。先日、今年の３月２２-２４日にまでSpringfield MOで開催される中西部日本人大会の記事が米国AG教団のONLINE NEWS掲載されましたのでこのBLOGにも転載いたします大会のホームページは、こちらとなります。お祈りをよろしくお願いいたします。
AG News
Return to News Index
Japanese Conference coming to Springfield
Fri, 20 Jan 2012 - 2:32 PM CST
What is believed to be the first ever Assemblies of God Japanese Conference will be held March 22-24, 2012, at Central Assembly of God in Springfield, Missouri. Although geographically called the Midwest Japanese Conference, the conference is intended to be national in scope - with Japanese Christians throughout the country encouraged to attend.
Led by appointed Japanese Assemblies of God missionaries, Daisuke (Dice-kay) and Yoriko (Yo-ree-ko) Yabuki (Yaboo-key), who serve as international pastors at Central Assembly, the conference's focus is on Japanese Christians desiring to further enrich their personal faith and be effective witnesses to other Japanese Americans.
"The conference speakers and workshops build upon one another," explains Yoriko Yabuki. "We will offer insights into how to reach Japanese Americans for Christ, how to equip Japanese Christians to launch and lead a Japanese ministry in their home or local church and finally, through this conference we will begin the development of the AG Japanese Ministry Network in the United States."
The keynote speaker for the conference is Dr. Amano Hiromasa, the general secretary of the Japan Assemblies of God. Hiromasa, who became a Christian when his mother was miraculously healed (and was himself, healed of cancer), planted and pastors Souka Shinsyo Christ Church - an international church that now has 14 branches in Japan and 23 overseas. A highly regarded speaker and teacher, Hiromasa has a passion for raising up leaders.
"We are giving worship and a sacrifice of praise to God in faith through this conference," Daisuke Yabuki states. "The conference is also the catalyst for creating the Japanese Ministry Network, which we are believing in God to one day grow into a full-fledged fellowship."
The conference will feature several workshops, led by the Yabukis; Paul York, a professor at Central Bible College; and Dale and Jan Crall, Chi Alpha Campus Ministry directors at Southern Illinois University in Carbondale, where they have a strong international student ministry. The workshops will cover topics such as living as a Japanese Christian, leading a Japanese Bible study, how to equip Japanese Christians to be leaders, baptism in the Holy Spirit and more.
"We are anticipating that many participants will be an important part of this conference," Yoriko Yabuki says. "We are also praying for churches and individuals to partner with us to help with the conference costs."
"This is a groundbreaking conference," states Scott Temple, director of AG Ethnic Relations. "Japanese Christians and those who lead or desire to lead a Japanese ministry, will find inspiration, resources and make key contacts who will aid in equipping them for Japanese ministry in the United States."
Registration for the conference is $80 prior to March 1 and includes five meals. Housing is available at local hotels, with Central Bible College offering a limited number of rooms for just $21 a night per person. For compete registration and housing details, click here. For more information about partnering to financially assist the conference, email Daisuke Yabuki atinternational@centralassembly.org.
Authors: Dan Van Veen
投稿者 Daisuke&Yoriko Yabuki 時刻: 1/28/2012